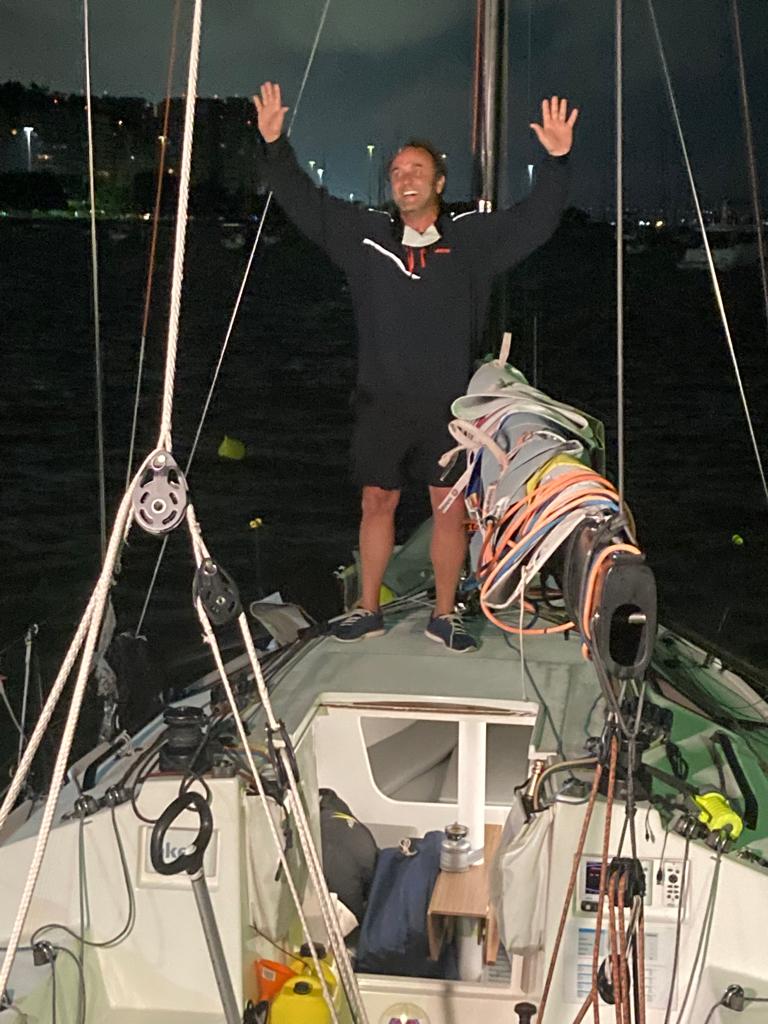 Adrian Kuttel’s exhausted face says it all!
Argonaut
Well we can almost smell the finish line. Last night skipper was woken as lightning was spotted on the horizon, directly in front of us and on our course. Whilst avoiding action was taken the lightning and accompanying low pressure also took action and moved in front of our path. Rather than sail around the storm we chose to sail directly through the “eye of the storm.” Words cannot describe the breathtaking scenes that we experienced. Deep darkness became the dramatic backdrop for nature’s most powerful light show. The air took on an electrical scent. Darkness turned to light. Glorious and terrifying. Dichotomous. Biblical weather that propelled us forwards but southerly. Whether that southerly element will pay off today is yet to be seen. Last we checked archangel is close but far and our epic battle to the finish line may come down to the wire. Also we no longer need to wash down the decks on arrival. The weather gods took care of that last night. Coming off watch one crew member commented that he was now a merman.
Nyamazela
All well.. had an awesome full day with our spinnaker “Chicken” yesterday… We decided to keep flying it through the night (normally we’ll only sail with a genoa at night time). So +-23:30 Wynand woke me up shouting…. Chicken wrapped around the forestay including spare halyard.. What a mess… we struggled for close to an hour and couldn’t get it down … we jybed 3 times… thank goodness for decent anti-gybes..halyard wrapped around top of genoa and no ways we could get it down. Wynand managed to catch the two clews and started winding Chicken like a sausage 😋 We tucked the chicken sausage behind the main and continued sailing under mainsail only for the rest of the night. This morning with first light we decided that today we are going to slaughter Chicken. It took us about an hour to un-wind and un-tangle the lot. Fortunately there was a bit of a weather gap… We are sailing under full sails again and the Chicken sausage is laying in the saloon… When we had a bit of e rest we will un-tangle and stuff it in the bag. 🤣😁⚓️
Cool Ideas Nemesis
All good with all on board. Maintaining heading for Rio between jib & mainsail or Code zero. Land in sight since daybreak. Feels good to be 63 nm out from the finish.
Felix
Felix goes fishing. Well we got smashed up by 2 marlin today so had to pull in the bungees to avoid losing all our fishing gear. For a minute we watched as 1 of them tried to shake the lure and perform its aerobics acrobatics. The helmsman was lucky to avoid the recoil of the bungees as the lines snapped. We are finally beneath the clouds and making good speed towards Rio, and can almost smell those cappharinos?. The one who looks like a Sailor befriended a bird that sought refuge on our spray dodger last night, a mere 2m away from the him. It was too exhausted to carry on any further on its own steam. That wild look after introduction of water rations has abated, and we no longer carry around our bottles for fear of losing them. The Sailor has capitulated on the bread front and the baking hat now rests on Doubtfire’s bald head. Otherwise all is just peachy aboard. Till tomorrow. Out