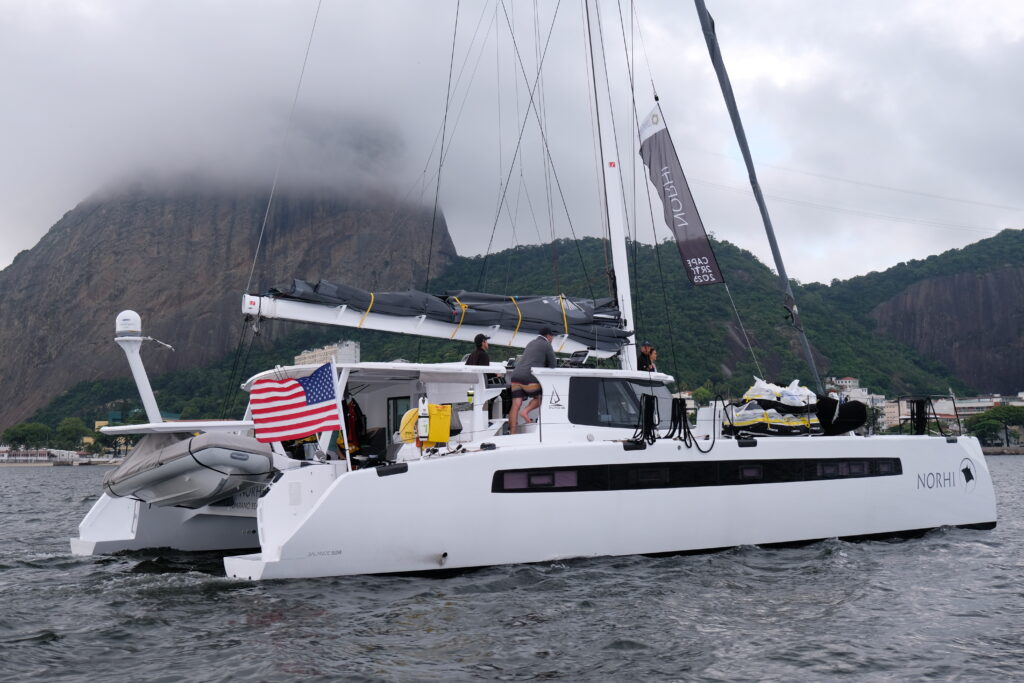 Norhi have finished and the first to arrive in Rio de Janeiro – welcome!
(Here are Norhi’s finish photos…)
Alexforbes ArchAngel
Everything is good on board we crossed Argonaut this morning so there was abit of excitement, other then that the conditions are good with good breeze
Argonaut
Around 3am local time (6am South African time) at shift change we noticed a boat popped up on our radar about 10 miles out.. and then a green light appeared on the horizon. After about 15 minutes the identification system picked up that it was in fact arch angel. Over the next three hours we watched as they came further north and we south and by 7am local time arch angel had gone from our port side to our starboard side.. we were both playing with some squalls and trying to get a little morning boost. We radioed them just after sunrise. They seem to be in very high spirits although they declined our offer for a braai and swim party. Apparently their skipper didn’t bring a swimming costume with?! We are now in a drag race as we make our way past Ilha da Trindade. Rather a special morning as they were the last boat we saw and spoke to before the fleet split off the coast of Namibia and they are the first boat we have seen since.
Felix
News of the last 2 days. 5 significant events in the last 2 days. The first was like an apocalyptic movie, with a meteorite burning into the Earth’s atmosphere from south to north, dimming for 15 seconds and then breaking up further & creating a firework display second to none. Today we woke up to pod of approx 100 pilot whales teaming up with Felix for approx 30mins. Some would swim either side of our vessel, whilst others would expertly zoom in at a 45 deg angle and change direction at the last minute on course with Felix. One misjudged and hit the boat with a loud thump. They only went on their way once we started the engine to make Pod coffee. The sailor made fresh bread which was enjoyed like English scones, butter and strawberry jam. The team installed the backup autohelm only to find out the 24v dip switch on the Raymarine S3 did not put out the requisite voltage. We may helm all the way to Rio unless a solution is found. Lastly, we were told that Felix is no longer the sweeper and has climbed one position. With all the boats closing in on Rio from disparate angles and wind speeds, this jockeying of positions is likely to continue until all boats are home. Otherwise all is well and happy aboard. Even the meerkat now moves around unencumbered without her PFD unless at night or alone. Out.
Nyamazela
All well on Nyamezela..
Adventurerio 4
The night before was the calm before the storm… this night at 2am we where literally hit by a sudden gust of 37 knots that caught us with all sails up (main and genoa). Only ½ hour later the wind subsidized enough to allow us to put 2 reefs on the main. In this meantime it was a wild ride with the Captain on the helm reaching speeds above 20 knots! Heavy rain followed during the whole night, and later on we put the 3rd reef and rolled half of the genoa. For the past 10 hours the wind has been above 30 kt and the seas build to 3-4m waves, some towering above the 4m… we are surfing the waves and have reached 22.5 kt! A real rollercoster! The toughest conditions on this Cape2Rio, less than 200nm from the finish. During this ordeal our computer got a corrupted file and stopped to be able to receive our much needed GRIB files. Without them we can’t update our routings and can’t decide the best routes to safely negotiate this storm and the calm that lies ahead. Yes, after this storm, we will need to face a calm before the finish! Those are the challenges of a sailboat race, specially a long one. Thanks God we have a sound boat and great crew. Our spare computer is already working and we were able to receive the weather forecasts again. They will prove essential on this last stretch. We just heard that Norhi has crossed the finish line. They sailed a great race and reached the well deserved Line Honors! Congratulations Larry, Norhi, kids and crew! We exchanged the lead a few times during the first 4 days of a much disputed race, but after that they showed greater speed and opened on us day by day, consolidating their lead. Well done guys! Sunday morning we shall be arriving in Rio.
Atalanta
The wind. She blows. Rattle and hum. Good fun.
Cool Ideas Nemesis
All good with all on board. Very dark last making helming a real challenge. Eventually dropped A4 to pole out the jib. S2 this morning and now the A4. Starboard tack for Cabo Frio.
Translated 9
Everything ok on board