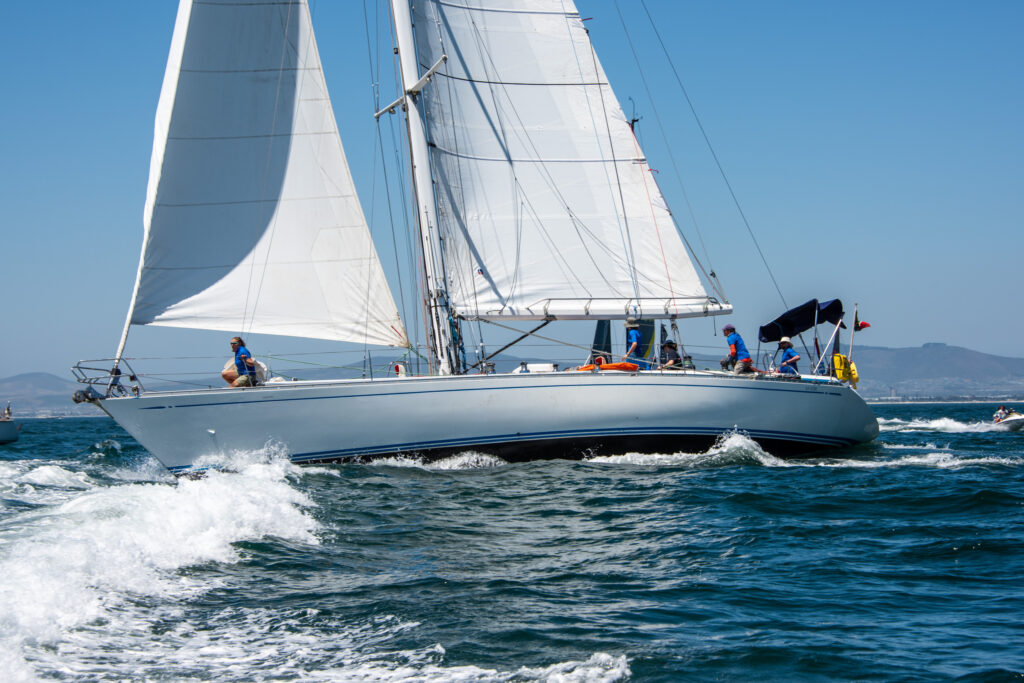 Sterna
All good on Sterna. Saw tricolour last night. Not sure if c2r boat.
Argonaut
Solidly in the trades. Life is settling into a rhythm. 1300 miles to go.. daily routine revolves around spinnakers, food and cooling down techniques. Watermaker working overtime. Not much swimming or fishing happening.. this is a serious race boat don’t you know. Some properly interesting squall action last night for the two McDonald crew members on board. Off to hoist a kite.
Nyamazela
All good this side, just a sloooow day with light winds and more of that expected (eish).
Adventurerio 4
Adventure at high levels… Yesterday we sent a crew aloft to do some work. But we could never imagine that it wasn’t the last time… At 04:15 GMT our spinnaker embraced an unused halyard and wrapped itself tightly around. A perfect hourglass, and a tight one! All crew on deck!!! The Captain climbed the mast to unwrap the unwanted package. The seas weren’t big, but still enough to cause some wild gyrations up there, and at one time the Captain went 3 times around a diamond shroud! We were able to unwrap it, lower the spi on deck, reorganize and hoist it again. Great teamwork! So much adrenaline! We are still suffering from soft winds. Right now it’s 8-12 knots dead downwind. And the sailors know that light winds from dead astern are not a dream but a nightmare! Our crossing from Brazil to SA, cruising, was done at an average of 8.6 knots. We are suffering to keep our racing average above 8!!! Still +600nm do the finish line. Norhi has been sailing very fast, but we keep pushing as hard as possible. The bloody Captain never gives up!
Alexforbes ArchAngel
Things on bored are good we can’t wait to cross the finish line everyone really excited so working hard to get there and seems as if it’s getting hotter the closer we get to Rio but we coping.
Atalanta
today i shall be trimming.
Cool Ideas Nemesis
All good with all on board. Problem with the water maker but been working on it all day. Pump brushes done. Holding thumbs otherwise serious water rations.
Felix
Felix heads west. After the hard lesson of discovering a spinnaker requires both a port and starboard halyard to avoid chaffe and blowing, we are finally heading west on route to Rio. Miss C once again put his not so slight frame into a harness and went up the mast to rig up another halyard. Once on course, the crew decided that the skipper was dispensable and put him on the hot seat for a roasting. The air is now cleared. Autohelm on hold for now, as well as bake off. Conditions are so balmy that even the little meerkat has poked her head out of its burrow for some not on shift sun. The artist also made a brief appearance as safety officer for the climb up the mast, much to the relief of Miss C. 11 days to Rio on a fresh horse is the consensus view, but we shall sea. Till next time. Out
Ray of Light
This morning we were ghosting along, bright sunny skies, gentle breeze, azure blue water. Given that this race is hotting up, particularly our battle Audaz, our supporters back home and some on the boat have started a movement called stop fishing! But dadda! The water is 27.5deg, stunning for fishing. And we have belly strips in the fridge. Sean and I tied belly strips into the lures, smaller lures so as not to entice a Marlin. 20 mins later the reel was screaming. Francois on the rod this time. The boat was doing about 8 knots at the time of the take. We were pretty sure that it was not a Marlin this time, so decided to reel the fish in with the boat moving. Bow down to depower the kite a slow down a bit. After a couple of minutes we could see a lit up wahoo coming to the boat. Sean ready with the gaff. As he took the gaff shot, the gaff handle came off. Gaff in our wake, handle in Sean’s hand. The wahoo gave a violent head shake and shook the hook. We decided to drop the kite and go back for the gaff. Tam and Jen to the foredeck, looking up they exclaimed, the kite is wrapped! Darn! After trying to unwrap it from below failed, we sent Tammy up the mast to unwrap from the top. She did a great job and in a few minutes we had the kite on the deck. She shouted that the view from the top of the mast is amazing, but she could not see Audaz. Is that a good or bad thing? Once the kite was untangled and rehoisted we had mutiny on board. The anti fishing movement gaining support. I had to remind the crew that the boat has a plank (bow sprit) and that I subordination will not we tolerated. All settled down now, lures back in boat sailing and Sean is next up the mast should a similar incident occur. Gybed a few times this morning until the wind finally dictated that starboard gybe it is for the time being. Happy to consolidate our westing and close down a little leverage on the boats to the north. Bacon, eggs and beer bread for lunch, no wahoo steaks. With a string of sea mounts to the west of Ilha Trinidade I expect us to be on starboard for a while if the fisherman gets his way. Love it when the weather routing and fishing spots align. Just remember who is doing the routing. 🙂