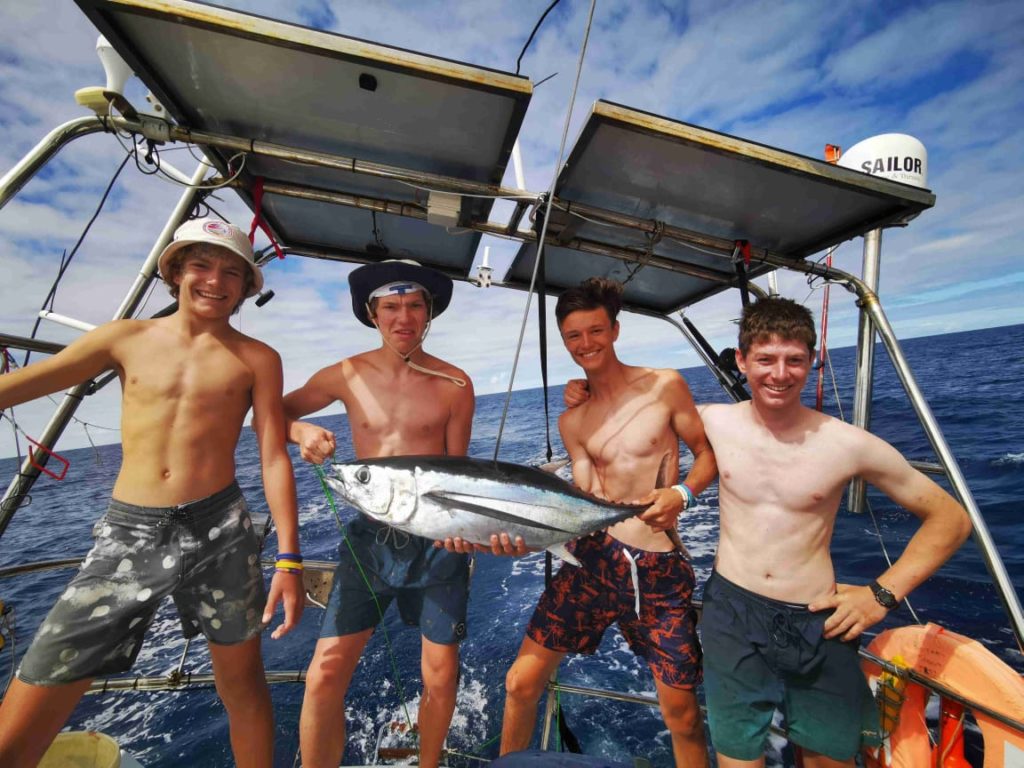 Adriana:
today we had lamb and champagne
best regards

Anjo:
racing main put out to pasture cruising main up and running: Neptune told team Anjo to go west and they responded Ahrr

Love Water:
ALL GOOD ONBOARD. HAMMER DOWN AT MOMENT

Mojie:
We have repaired our Big Bertha spinnaker – first the head and then four separate holes. We are enjoying the bigger swells with our smaller symmetrical spinnaker up, and Mojie’s Big Wave Surfing Crew are on standby to take on the Dungeons of the South Atlantic, if Neptune delivers on the forecast.

Late yesterday afternoon, Lize Maartens and Inge Swart (the only 2 crew members who have not crossed the Greenwich Meridian before), gave an electrifying performance of dancing which had the crowd on their feet. Never before has “Echame La Culpa” by Luis Fonsi & Demi Lovato been performed on a dance floor at this level. The dance performed by them can be described as a cross between a “Boesmanland-Riel” and “The Floss”. In short we just call it the Myrtle-skoffel (translation: shuffle). Afterwards a few members of the crowd were pulsed for their opinion. Pietman: “I did not know Inge can do that.” PK: “That is not the Lize I know”. Sonja: “Ja-Nee” (yes-no). Skipper: “I tried to join them a few times, but could not keep up. Ek het mos n knieg. (I have a knee)”

We are having 15 to 20 knots of wind, just enough to keep the spinnaker from not being overpowered. We move on in the right direction at between 7 and 9 knots, sometimes surfing at 11 to 12 knots.

Crew is happy and fed.

Ronin:
Having a hectic day. First we loose our second kite and then our main sheet shears off on the aft end of the boom. Drop all sail and repair. We doing pretty well now on wing and wing arrangement with full main and Genoa. Bonus that the wind has picked up. Ronin

Saravah:
Today we reached an expected area of lighter winds, but have been able to keep the boat moving, at the cost of constantly changing spinnakers. Some maintenance chores onboard also have kept the crew busy. Lots of expectation for what will happen in the next 24 hs…