The final total of 59 entries for the Rio race fell far short of both the 120 that were expected, and the 83 yachts that set sail in the last event three years previously, however the race proved to be exciting as ever. Hasso Plattner was back with a new state-of-the-art 24,5m carbon fibre-constructed ILC70 maxi, Fancourt Morning Glory (the biggest entry in the 54-boat fleet that set off). Although she was reduced to a crawl, she reached the mark 380 miles ahead of Broomstick’s record pace. Despite being reduced to a crawl near Ilha de Trinidade, she had reached that point 380 miles ahead of Broomstick’s record pace and as expected she set a new record of 14 days, 14 hours and 52 minutes, once again slicing a considerable chunk off the record set by Broomstick in the previous race of 12 hours and 18 minutes.

The older 21.8m Nicorette, winner of the 1995 Fastnet, took second place but her entry was not without controversy. Rothmans, as title sponsor to the 1996 edition had objected to her entry and she was barred because they considered the product to be in competition with the sponsor’s product. They later appealed and could compete.

Daly’s Insurance, a 75-footer, made the early running by heading south, but she soon paid the price for her risky course. A trio of South African yachts; Warrior (a Simonis 60 – owned by Phil Gutsche and to be skippered by Rick Nankin), Wizard and Wire Sirocco were expected to fight it out for the handicap prize, but the final run into Rio, from Ihla Trinidade, all three were caught in calms, and their hopes ticked away. The South Atlantic Trophy went instead to the 10m Renfreight, skippered by Norjohn Kennedy, showing that the handicapping system still allowed smaller yachts a chance of a win if well sailed.

Other notable entries in the race who participated for the sheer enjoyment of doing so include Sammy Naidu on his self-built Aquarius 1, a group of UCT students sailing H20 International, the “all-girl” crew headed by Marion Cole on Kelly Girl and Dudley Dix on Black Cat which he designed himself.

Bertie Reed was also back sailing his L34 Three Ships Whisky with a modified keel to improve performance, veteran Voortrekker II under her new name Trekker 2, having been extensively overhauled by new owner Alf Duncan. The South African Navy also entered their Centurions Southern Floe and Southern Maid, as well as the Fast 42 Umoya Omusha. 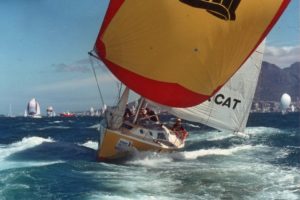 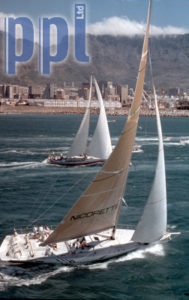