INSV Tarini will be participating in the forthcoming Cape2Rio Race 2023.

INSV Tarini is a Tonga 56 design cruising sloop rigged vessel built at the Aquarius Shipyard, Goa. The vessel was handed over to the Indian Navy/Ocean Sailing Node, Goa on 18 February 2017 and christened as Indian Naval Sailing Vessel (INSV) Tarini, after the Tara Tarini temple. Tarini’s hull is built of wood-core and fibreglass.

The boat has six sails, including mainsail, genoa, stay, downwind and storm sail and is capable of sailing in extreme conditions.The boat measures 56-feet in length and weighs 23.4 Tons. The mast is custom built by M/s Southern Spars, Cape Town, which is about 25 meters tall. The vessel is fitted with an advanced navigation and satellite communication system, a Volvo Penta Main Engine, a DG, a water maker and a robust steering system.

Tarini, since her commissioning has sailed over 50,000 Nm with one circumnavigation, a diplomatic mission to Seychelles and back, a sailing expedition to the Bay of Bengal followed by her cross coast deployment for the President’s Fleet Review in 2022. The vessel etched her name in the annals of history with the successful completion of her maiden circumnavigation voyage under the Navika Sagar Parikrama project. The vessel recently returned from Mauritius as a part of a training sortie for women naval officers.

Captain Atool Sinha has about 41 years of sailing experience and has won several national and international medals for India, including a silver medal at the 16th Asian Games at Gungzhou, China in 2010. He also participated in the 2017 Cape to Rio Race, as Skipper of INSV Mhadei, a 23.4 T vessel, and completed the race in record time of 20.8 days. This was Mhadei’s best performance since her first participation in 2011.

The crew consists of Cdr Vikas Sheron – the navigator, Lt Cdr Ashutosh Sharma, an Electrical officer, two women officers – Lt Cdr Dilna K and Lt Cdr Roopa A, both being trained for taking over as skippers of a 56-foot boat, and Slt Aviral Keshav, a young officer learning the nuances of ocean sailing. 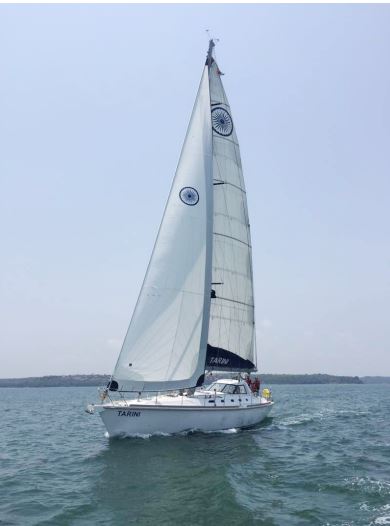