Who would have thought 49 years ago when this race first started that the line honours winner of the Cape to Rio Race would take just 7 days and 20 hours to complete this South Atlantic dash? Well that’s what ‘Love Water’, skippered by Craig Sutherland, achieved – 49 years after the first race. 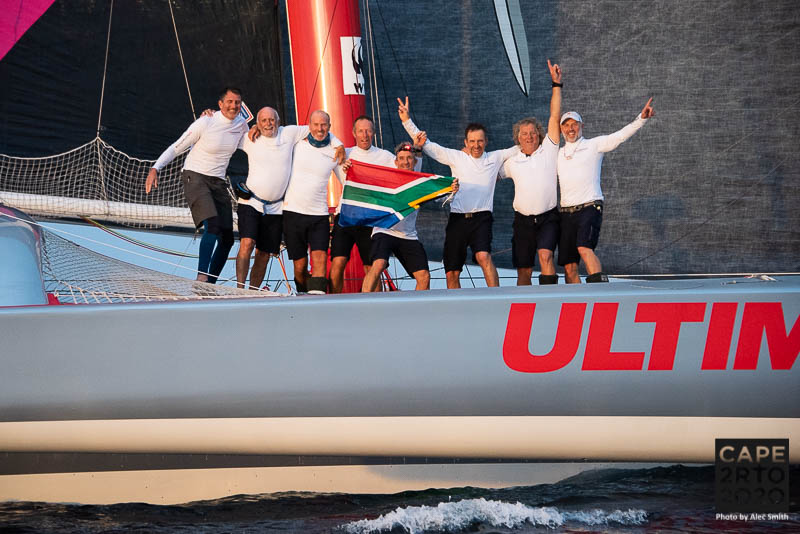 In the very first race to Rio in 1971 the line honours winner was ‘Ocean Spirit’, skippered by Robin Knox-Johnston & Leslie Williams in a time of 23 days and 42 minutes. The race was won overall on handicap by ‘Albatross II’ with an elapsed time of 26 days and 14 hours, corrected to 22 days 01 hours on corrected handicap time.

Those were benchmark times which have slowly been broken over the years – with ‘Love Water’ smashing the previous record by almost 3 days.

The race organisers have issued a weather advisory to the fleet about some low pressure systems that will start forming off Rio on Thursday, and by Friday could bring winds of 40 knots or more, with accompanying big seas. The advisory says:
“…the low is accompanied by an intense frontal system with secondary lows embedded in it. This extends the range of strong wind and confused, high swell conditions far to the North of the low’s position. It is therefore likely that any yacht within 500nm East of Cabo Frio, and south of 20S, from Thursday 23 Jan to Sunday 26 Jan, will encounter severe weather and seas. ECMWF shows the most severe conditions. Challenging conditions North of 20S is possible. Frontal transit South of Rio’s latitude is discouraged. It is recommended that yachts within reach of this weather system on the above mentioned dates should remain north of 20S until west of the front”.

While this is all part of ocean racing, modern technology permits one to pick this info up early enough and issue warnings to the fleet. Plus each and every boat has the ability to monitor the weather systems and plan their attack well in advance, as well as prepare themselves and their boats.

The northern and southern fleets continue to sail as two distinct groups, with the ‘Sulanga’, ‘JM Busha 54′, ‘Mojie’ and ‘Adriana’ all having gone north of the 20degrees South latitude where they are sailing at approximately a knot slower than those in the southern fleet. For the northerners the lows they have been warned about are about 700nm away – so about 4 sailing days away.
The 10h00 YB Tracking update shows that ‘Zulu Girl’ has snatched the lead from ‘Mussulo’ who drops down to 4th spot, with the top 5 handicap positions belonging to the southern fleet, and ‘JM Busha 54′ leading the charge of the northerners in 6th spot.
It’s far to early yet to consider predicting a winner as ‘Zulu Girl’ has 1348nm to go with ‘JM Busha 54′ having 1064nm to go and the magical “less than a 1000nm to go’ milestone beckoning later in the day.

‘Sulanga’, the lone catamaran at the front of the northern fleet has 947nm to go, and has constantly been leading this fleet in terms of line honours. Her 120nm lead may well be compromised if, and when, they hit the bad weather forecast.