The largest yacht ever entered in the long colourful history of the Cape to Rio Race arrived in Cape Town this
morning, after an epic delivery from Genoa in Italy, via Tenerife, Cape Verde, Ascension Island. The
beautiful Almagores II, is a 102 foot luxury super yacht built in Cape Town in 2012 by the multiple
award winning Southern Wind Shipyard, based in Athlone. She has been based in the Mediterranean
ever since, and this is her first visit back to her birthplace. 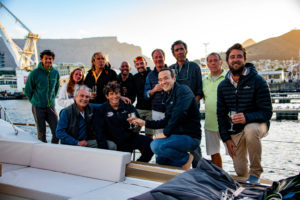 A happy delivery crew with a guest from SWS Yachts, Cape Town’s builders of these amazing boats. 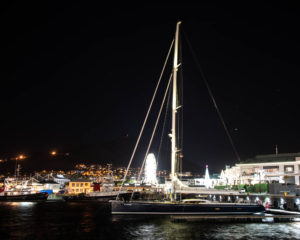