Some of our students have been sailing in our academy for more than 4 years and they have accomplished a lot in and outside of our academy. These students always asked me what else there is to do in sailing. One of the things that always came up was taking part in a real offshore sailing event. Since the RCYC is organizing the Cape 2 Rio Race every 3 years, we don’t have to look far to find the ultimate goal in sailing.

The entry of our own academy team was always the ultimate goal for our students. During the previous years we had reservations to send young students across the ocean who only had limited off shore experience in sailing. Now we have students that have either done a C2R campaign or other off shore races, there has never been a better time to get our first C2R campaign together.

When Danie Colyn kindly offered the use of his SmartTri40 to the academy, things were just progressing fast from there. We have a boat and we have a team, all that is missing is the final commitment from a sponsor to set our first ever C2R campaign on its way.

May I introduce the boat and the team? 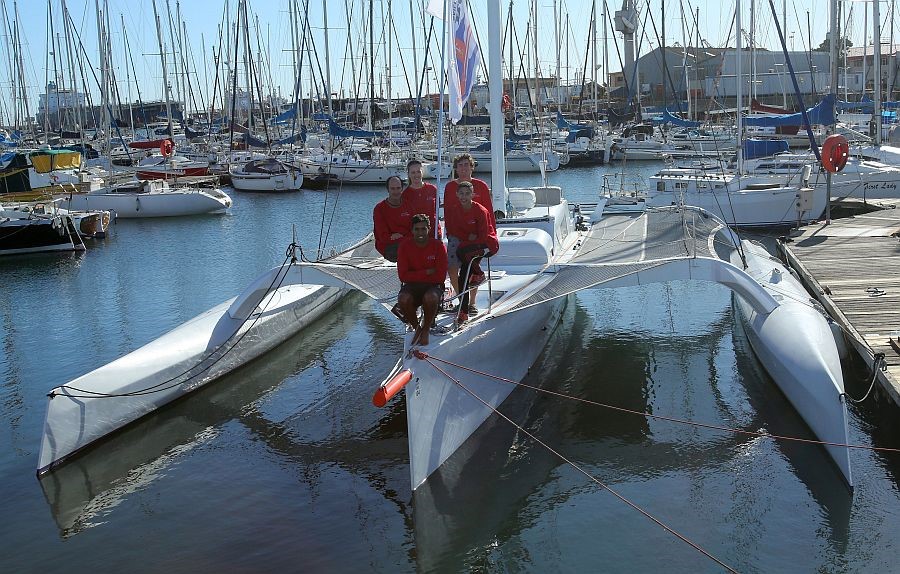 The SmartTri40 is designed to be a fast cruising alternative in sailing. Sitting on 3, instead of only one hull, is already enough reason to make some sailing folks suspicious. Most people have never sailed a trimaran before but yet they have a very strong opinion of these boats. Daniel and I sailed the boats from the Seychelles to Cape Town and have become multihull converts. These boats can not only sail fast on a reach, they are also quite exiting and safe to sail on higher or lower angles. We have been through severe weather conditions and never felt unsafe on the boat. Apart from our reoccurring rudder problems the boat performed flawlessly and exceeded our expectations. The structural changes made to the rudder should take care of it and we will have enough time to test the boat before the start of the Rio race. We have already entered the boat to the Mossel Bay Race in September.

Cathleen Hughes, at only 20 years of age she has already managed to get her Yachtmaster Offshore certificate. She was taking part in the previous C2R race on “Rotary Scout” and has won the Governor’s Cup on “Black Cat” shortly after that. In both races she also delivered the boats back to Cape Town. She will be our Co skipper and will bring the much needed structure to our program. She is currently studying law and agreed nevertheless to play an important role in our campaign. She has also stepped up to coach other students in our academy and showed the much needed people skills. Cathleen will be responsible for the media and press releases.

Daniel Agulhas, aged 23, is the most experienced and qualified coach in our academy. He has done any possible yacht race in SA during the last 5 years and has had success with every team he joined so far. He has sailed with me in many campaigns and on various boats during the last 3 years. He is about to do his 3rd Lipton campaign as tactician on B&G. In his first own Lipton campaign he managed 2nd place, a feat that not many young sailors have achieved so far. He has done the last Vasco race from Maputo to Durban with me and also has been part to deliver the SmartTi40 from the Seychelles, which was a very memorable trip in every aspect. If the going gets tough you can count on him. Daniel does not get scared too easily. He will be our boat captain.

Mike Hardy, aged 19, has not missed an academy race team during the last 3 years. He is Mr. Fixit in the academy. If nobody can help, Hardy can. For that reason Hardy takes charge when things go pear-shaped. Like Daniel, he is about to take part in his 3rd Lipton campaign, this year he will be the skipper of the team B&G. Apart from local racing, Hardy has joined “AL” to do the Vasco Race this year and delivered the boat up and down the coast. Needless to say that he was able to find challenging sailing conditions along the way. They won the Vasco Race on “AL” not only in their class, they also took line honours and slammed the race record by almost one hour. If that is not enough they also won the IRC Nationals in PE shortly after. Hardy will miss some of our C2R preparation as he has already committed to race on “Music” in the Med. Hopefully he will learn a few tricks from Mike Giles and Gerry Hegie.

Shannon Cupido, aged 20. Shannon is the wildcard in our team. He is following closely in Daniel’s footsteps to become a sailing coach. Shannon only joined our academy in 2015 and I have not spent enough time with him to fully understand his capabilities on a yacht. He is a very talented helmsman on dinghies and shows the same talent on the bigger boats. He is also very committed to get into race campaigns and seems to be a good team player. He will have to prove that he can take a punch out at sea. There is no turning back once we have started the C2R race and he knows it. His first real offshore race will be the Mossel Bay Race in September.

Harry Brehm, aged 52. Yachtmaster Offshore. Harry is the manager of the RCYC sailing academy and coach of the academy students for last 3 years and knows their capabilities very well. He will be guide and assist the team where possible but will not lead the campaign.

Since our students already have a wealth of experience in sailing they will only need little guidance from my side. We have been planning this for over 3 years and this will be our chance to take the first ever RCYC academy team to Rio. It will be a long and bumpy road ahead of us to find a sponsor for the team. If that is done, we still have to prove to a lot of people that we are able to take the 3 legged beast safely to Rio. Our aim is to get to Rio as quickly as possible, to be able to challenge the Multihull class.

The team and the boat have got a lot of potential and we will do our best to prove it. Any prospective sponsor can expect a lot of mileage in the news department. Eben Human and Jeff Ayliffe are already onboard to help and support us with the media. Neal Petersen has agreed to be our mentor in this campaign and will give us guidance along the way.

We have the youngest C2R team and one of the most challenging boats to offer. It doesn’t get much more exiting and better than this.