Getting in and out easily.

Skippers are to sign in with Marina Secretary, Diane Bright, and complete all relevant documents on arrival in RCYC Marina (supplied by office).

Once complete, skipper and all crew (must all carry passports) are to visit the IMMIGRATION OFFICE which is situated at:

After which, proceed to CUSTOMS (next door to Immigrations in the Transnet Building). 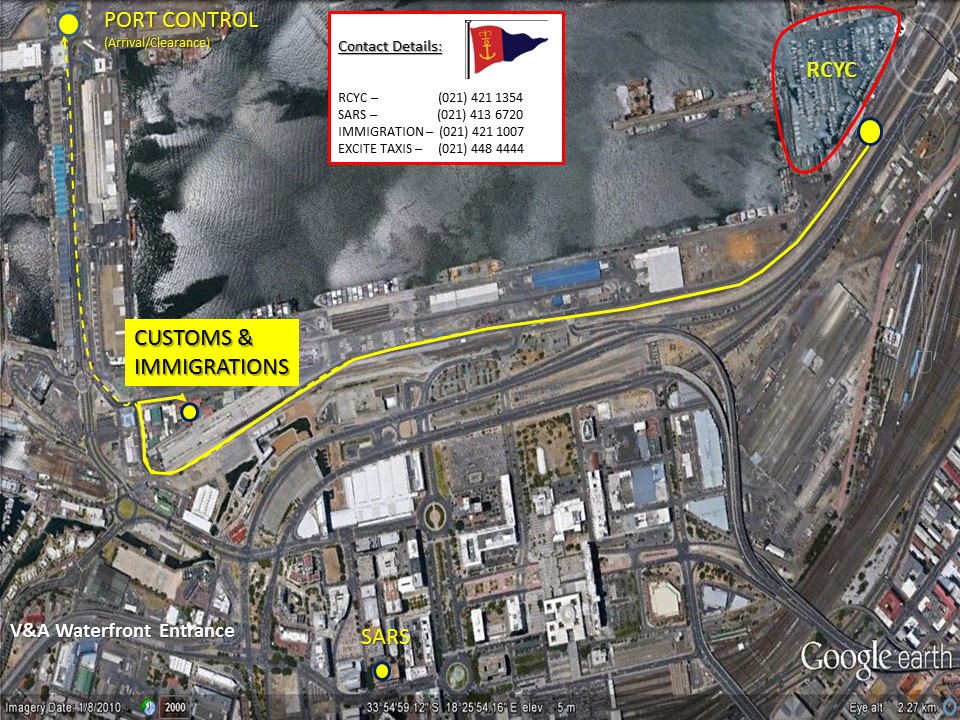 Immigration | Out of CT

Visitors are required to settle all outstanding balances with the RCYC, then complete a VOYAGE PLAN as well as PORTNET CLEARANCE FORM (supplied by RCYC Office).

Once completed, three Clearance certificates will be issued for PORTNET, CUSTOMS AND IMMIGRATION by the RCYC office.

i. Vessels registered in South Africa require the Boat Owner/Skipper to submit a SAMSA registration document (boat MUST be registered at SAMSA)

If you wish to sail in foreign waters, a SAS listing and COF are no longer sufficient. You will need to get your vessel registered through SAMSA and also obtain a local general Safety Certificate (LGSC) for your yacht.

Without these documents you will not be able to clear customs.

ii. Voyage Plan – to include anticipated route as well as Insurance Certificate.

Proceed to PORTNET Multipurpose Terminal, situated near the PORTNET TOWER.

On weekends PORTNET operates from the BON 1 Building, situated behind the Mission to Seafarers (opposite Table Bay Police Station) in Duncan Road.

Following PORTNET, proceed to next door to IMMIGRATION.

iii. The last port of call is CUSTOMS CLEARANCE & VAT Refund. To claim VAT, all original invoices are required. For items too large to bring to the office, appointments can be arranged 24hrs in advance wherein a officer will conduct an inspection on board.

When leaving for an international clearance the following procedure applies (all to be presented to the customs officer upon clearance):

SARS – DA 3 Certificate of Clearance for Ships for a Destination Outside the Republic.

Immigration | In to Rio

Arrival Procedure for arrival in Rio:

Customs/clearing agents are available at a cost of $450 (This includes clearance in and out of Rio Port).

Some clearing-in advice from Liza Zagt (Leia B), 2017 entrant:

Address: Centro Cultural do Ministério da Saúde (CCMS), Praça Mal. Âncora, 95 – Centro, Rio de Janeiro – RJ, 20021-200, Brazil (Policia Federal)
(It is about 400m behind the ferry station on the right facing the sea, it is walking distance to the next place – follow the sea along the promenade past Museo do Amanha)